World Premiere of Bone on Bone by Marylou DiPietro 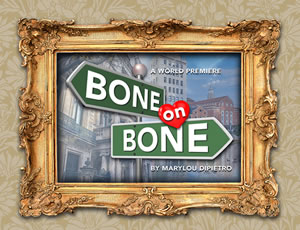 Announcing the world premiere of Bone on Bone
January 9 – February 9, 2020 at NJ Rep

NJ Rep in Long Branch, New Jersey, is premiering Marylou Dipietro’s new comic-drama about a NYC couple who realize that their lives are moving in separate trajectories. Jonathan is a successful attorney, pretty set in his ways, who likes his life and the way his 35 year marriage has been going. Linda is an artist who has just been offered a top position at a prestigious art school—the career path she has always dreamed of having. Neither want to end their marriage, but neither want to divert from their chosen path. Who will bend, and who will break?

Regular performances of Bone on Bone are Thursdays, Fridays at 8pm; Saturdays at 3pm and 8pm; Sundays at 2pm. Previews Thursday, January 9 and Friday, January 10.

“Marylou DiPietro is to be commended for addressing the struggles to find identity and meaning in a committed relationship without sacrificing the integrity of the ‘tie that binds.'”