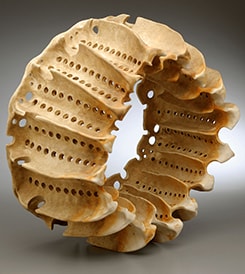 When Linda, an unfulfilled, soon-to-be 60 year old artist, reunites with her secret admirer and former mentor after 25 years, she must convince her New Yorker husband Johnathan to move to Rhode Island or face the tough decision of living life without him. 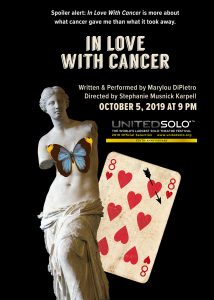 In Love With Cancer

In this sometimes bizarre, often uproariously funny and heart-wrenching story, a woman’s worst fear becomes reality. While recovering from her surgery, she stumbles into a rabbit hole of revelations and memories leading all the way back to the Garden of Eden and the realization that “shame is the real cancer that needs to be lopped off and thrown in the trash.” 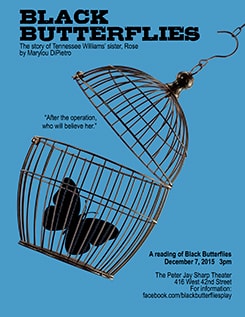 The safe and idyllic world Rose created for Tom (Tennessee), her shy and sickly younger brother, suddenly falls apart when their father, a hard-drinking, womanizing, traveling salesman, moves the family from the peaceful home of their maternal grandparents, to the “dreadful” city of St. Louis. As Rose and Tom struggle to cope with their puritanical mother and tyrannical father, and their own emerging sexual identities, the very underpinnings of their symbiotic relationship begin to crumble. Tom eventually escapes the oppressive household through his writing, while Rose remains imprisoned behind a terminal wall of silence. 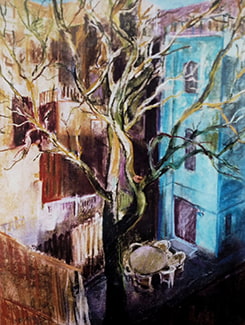 It’s 1976. Twenty-one-year-old Sarah recently moved to New York City to establish herself as a writer. She has gone through a string of dead-ends jobs when her father stops by during a lay-over on his way from Florida to Massachusetts. Sarah asks him if she can borrow some money. When her father ignores her need for financial support and for unconditional love, their relationship quickly drifts into turbulent waters.